What's so special about the Silver Age of Comics?

"The Golden Age of science fiction is twelve."

THOUGH THAT STATEMENT has been variously attributed to Isaac Asimov and Theodore Sturgeon, turns out it was credited by SF editor Terry Carr to his friend Peter Graham. But the fundamental truth of that is more important than who said it first. So for me, the best era ever in comics was my pre-teen years, in the early 1960s. I'd started off on the Weisinger and Schwarz edited DC Comics, which really were aimed at kids of 8-10. But then Stan Lee came along with his strange Marvel books. And I suppose that's what stopped me growing out of comics.

The first American comic I remember seeing was an early DC science fiction book. It was on the counter of a newsagent, somewhere in London. It had a couple of kids in a canoe and they'd hooked a green monster on their fishing line. I could only have been about five. Boy, I wanted that comic ... but my mum didn't approve of horror comics, so that was that.

I'm sure there were other comic books, either borrowed from friends or read in the playground, but the next clear memory I have of US comics was a year or two later ... I don't know where I got it from but it was a copy of Tales of the Unexpected featuring a character called Space Ranger. It had one of those great concept covers of the period where the hero was shown in some impossible situation and the reader would be desperate to find out how it happened and how the hero gets out of it. In my case it was neither, as I was largely unaware of these colourful American imports.

Still, these stories were completely different from our homegrown black and white weekly comics. Instead of shoeless footballers and animal adventures, there were spacemen that became fused with their alien foes. And it was these imaginative ideas that captured my eight year old attention.

Pretty quickly, I had left Lion and Valiant behind and focussed my efforts on finding more American comics. Exotic titles like Green Lantern and The Atom were on my shopping list. I managed to get hold of a coverless copy of Batman Annual 4. I read that comic, um, cover-to-cover dozens of times. My two favourites were "The First Batman", where Batman discovers his father had fought crime in a bat costume before him, and "The Man Who Ended Batman's Career", where Batman is afflicted with Bat-o-phobia and must assume a new identity - Starman - so the crooks won't use his terror of bats against him.

I also have a strong memory of Flash 135, which came out around the same time. The story teamed Barry Allen with the nephew of his fiancee, Wally West. Wally had acquired similar powers to the Flash in an earlier issue when Barry was explaining how the Flash received his abilities and lightning had actually struck a second time.

DC Comics of the period was driven by just such implausible coincidences, but I was eight and didn't care. I think what left me slightly breathless about this story was the incredible alien cities drawn by Carmine Infantino and the haunting beauty of the female alien who befriends the youthful Kid Flash.

Pretty soon, I was devouring the Superman family titles. Of course, I didn't know it at the time, but these books were all under the iron rule of Mort Weisinger. They were corny and the scene on the cover hardly ever quite matched the story on the inside ...


By the first half of 1965 I was getting a bit tired of the Superman books. I'd read a few Charlton hot-rod comics, which I quite liked, but someone at school had a copy of Tales to Astonish 51, which a bit different to any of the other comics I'd been reading.

I wasn't quite sure what to make of Giant Man. His superpower seemed quite straightforward. He got big. But there was something sombre, subdued about the heroes in this comic. Even though their costumes were primary red, the villain somehow stood out more than the protagonists. In retrospect, I think I now know why this was, but I liked the "twirly guy" enough to look for some more comics with that distinctive corner emblem.

Not long afterwards, I came across two more Marvel comics. Coincidently, both starred a hero who was to trigger my collecting mania for Marvel books - Captain America.

To kids growing up in early Sixties Britain, America was a fabulous land of plenty, where everyone was rich and the cars looked like spaceships. In Britain, everything was in black and white. Our television, most of our movies ... and our comic books. Everywhere were reminders that only a few years before, Britain had borne the brunt of the German bombing campaign. Southeast London, where I grew up, was littered with bomb sites. Not far from my house was an open emergency reservoir, about the size of a small swimming pool, designed to catch rainwater in case the bombing cut the water pipes in the area. It was a drowning just waiting to happen, but we didn't have Health & Safety back then. Heedless of the danger, we used to catch sticklebacks in that murky, green water. And of course the many bombed-out houses formed our principal playgrounds. Much of this background I would use for the second series of Luke Kirby that I wrote for 2000AD.

So it was hardly surprising that my ten year old self found Captain America a symbol of progress and riches. I first came across the character when he and Bucky battled some fake mediums against a WWII backdrop.

There was also a strip with Iron Man fighting two pretty gloomy villains, Hawkeye and Black Widow (who was purple, not black), but it was Captain America who had my attention. His stars-and-stripes costume and his cool shield were great, but it was the fact that he didn't seem to have any actual super-powers meant that ... yes, I could be Captain America when I grew up.

I also liked the idea of both the interior strips sharing the cover. DC Comics of the same period also had a second superhero story (Aquaman in World's Finest for example, and Elongated Man in Flash). but Marvel was doing something different. It was giving both strips equal billing - on the cover. They were letting you know right up front that you were getting twice as much adventure for your ninepence.

As with Tales to Astonish 51, the colouring in Tales of Suspense 64 was subdued. Although Iron Man and Captain America were all bright primaries, the worlds they inhabited and the villains they fought were all sombre secondaries - maroon, purple, grey. It wasn't much different in the next Marvel comic I found.

Avengers 15 caught my eye because front and centre, right there on the cover, was my new idol, Captain America.

The idea of a superhero team wasn't new to me. I'd seen and read a few Justice League of America comics - though at first I was amazed that the publishers didn't charge you more because there were more super-characters in the comic. But by this point I was able to put down my ninepence for the comic without the slightest twinge of guilt. OK, the drawing wasn't quite as good as in the first two Marvel comics. I wouldn't come to appreciate the craftsmanship of Don Heck until much later. And the book certainly wasn't as polished as the comics put out by DC, but it had an energy about it that spoke to my ten year old sensibilities.

And again, as with Tales of Suspense 64, while the heroes did have fairly colourful costumes, the villains were quite subdued, favouring a secondary palette of purples, greys and greens.

The one thing that puzzled me about Avengers 15 ... Captain America was operating in a contemporary setting, alongside other heroes of the Marvel present, while in Tales of Suspense, he was still fighting WWII. There was an explanation, of course, but that had been in a much earlier issue of Avengers which I wouldn't read until much later.

I had found a new obsession. I was done with Civil War News gum cards and The Beatles. Now I was on a mission to collect as many Tales of Suspense and Avengers comics as I could get my hands on. There was just one problem ... my mum didn't approve of comics any more in 1965 than she had in 1960. I was going to have to do this in secret ...

Next - Why Silver Age Marvel Comics were better than DCs.

BEFORE I DISCOVERED MARVEL COMICS , way back in the early 1960s, I confess that I was a regular user of DC Comics. It's not something I&... 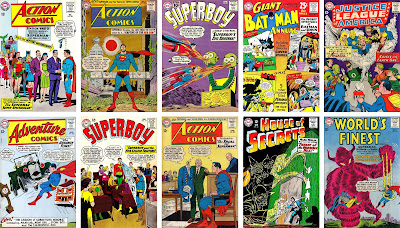 AirPiratePress
Air Pirate Press is a virtual publishing company started by Alan McKenzie and Brett Ewins to publish THE ART OF BRETT EWINS, a retrospective of Brett's 20+ years in the British and American comic industries. This was followed up with McKenzie's revised third edition of THE HARRISON FORD STORY, an unauthorised biography of the top Hollywood star. Air Pirate Press currently has several more projects in preparation.

Links to my other sites

Other blogs I read